November Bird of the Month: Goldfinches

In some respects, it may seem strange to profile goldfinches in autumn – it is in summer, as Dawson notes, that our two goldfinch species send their high cascading songs pouring out of every neighborhood tree and the American goldfinch shines as our most stunningly yellow bird. But most people with birdfeeders will find that these birds are more abundant and seemingly substantially hungrier during the fall and winter months. And while we may not have snow's cold dormancy to give contrast to our winter goldfinches, they sure seem to eat with an inner fire that seems even more burningly alive amidst the quieter world of autumn.

To speak more prosaically: while our two goldfinch species are both here year-round, they often spend less time at feeders during summer months when their customary flocks break up into more dispersed breeding pairs and natural food is abundant. Now is the time, however, when activity at sunflower and particularly Nyjer feeders reaches its winter heights, a level that will be more or less maintained until March or so. If you aren't already feeding them, read our article on Attracting Goldfinches for the scoop on how to start.

So, our two goldfinches are the American Goldfinch and the Lesser Goldfinch. One is at the top left above and the other is at the top right. Can you tell them apart? Here are some clues: 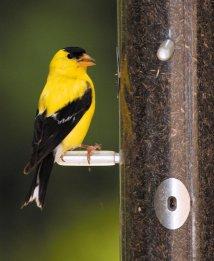 American Goldfinches are found across North America. (State bird of New Jersey, Iowa, and Washington. How about a little originality, guys?)

These birds have an easily distinguished flight call consisting of four fast, but even and distinct syllables that has been likened to “po-ta-to-chip” or "per-chick-a-ree." Go listen to it.

The American Goldfinch is one of the latest breeding songbirds, waiting to nest until thistle seeds and down are readily available. This is more pronounced in the East, but in California they still are one of our later-nesting songbirds, with a lot of nesting occurring from June to August. Both of our goldfinches build open nests in trees and will not use houses.

Nyjer seed, also referred to as thistle, is the classic food for a goldfinch-specific feeding station, although they will also happily eat sunflower chips, the main ingredient in our No-Mess Blend. The advantage of offering Nyjer is that it won't generally attract squirrels or larger birds like jays; the main downside is that in many areas you might not attract much of anything during the summer months when goldfinches aren't visiting feeders much. If you aren't already feeding goldfinches, it's very easy to get started: ready-to-hang, pre-filled "finch socks" can be had for a few dollars, or there are a variety of more durable feeders available. For a complete rundown on the art of goldfinch attracting, read our Attracting Goldfinches article.

To read more pages like this, visit our Bird of the Month Archive.