April Bird of the Month: Orioles

. . . they chatter like blackbirds; the fire bursts forth on their backs when they lift their wings.

Thoreau quickly arrives at the oriole essence: these blackbird relatives share some similarities of shape and chattering calls with their plainer cousins, but are distinguished by their brilliant golden plumage, which has few rivals among our local birds. Here, we have two oriole species which spend their summer nesting season with us, and both can be attracted to feeders. Hooded Orioles and Bullock's Orioles arrive beginning in late March and depart between August and September.

Both species will enjoy the same nectar solution used to feed hummingbirds, jelly (try our special grape/blackberry mix in a squeeze bottle), and mealworms. Although you may read of orioles loving orange slices, this unfortunately seems to be a preference of the eastern Baltimore Orioles and doesn't seem to be very effective in the Bay Area. While fruit may sometimes be eaten, jelly and nectar (a sugar water solution) are the clear favorites. For offering nectar, while orioles can use some hummingbird feeders, a specialty oriole feeder such as the one shown above has some advantages: wider ports to accommodate their beaks, larger size perches, and jelly-holding cups in the lid in addition to the main sugar water basin. We also carry special bee-excluding oriole feeders for offering nectar solutions only. 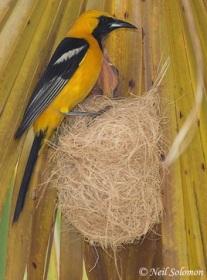 Some hummingbird feeders, such as this feeder by First Nature, have feeding ports that are wide enough for orioles to access. Some do not. 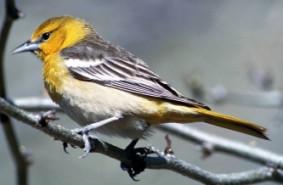 Male Hooded Orioles are easily differentiated from male Bullock's Orioles: Hoodeds have a black throat and golden hood, while Bullock's have a black cap and eyeline in addition to their black throat. Hoodeds are more likely to be seen in residential neighborhoods - especially if there are nearby palm trees.

Females are a little more difficult, with both species somewhat resembling giant female goldfinches. To distinguish the two females, first look for accompanying males (usually you'll only have one or the other of the two species) and note that Hoodeds have longer, slightly downcurved beaks in all plumages. Female Bullock's (pictured) have straighter beaks and a very white belly in contrast to the dull yellow belly of the female Hoodeds.

Visit our Bird of the Month archive to see more pages like this.